Big Bend is a land of extremes. Highs and lows, hot and cold, dark and light.   After traveling from Fort Worth and enjoying several stops along the way, we arrived at Big Bend National Park the day the government shutdown was announced.

We weren’t sure what to expect, but luckily the park was open all four days we were there.  We heard they shut it down after we left, so we felt quite fortunate to have been able to freely explore the whole park.  Without any park services, the visitor center was closed, but we found an app called Just Ahead that turned out to be incredibly useful for our visit.  You need to download the app and the park program before you lose service, but once you have it on your phone, it uses your GPS signal to guide you to all the points of interest in the park along your drive.  There were many scenic areas we would have missed without this app and I’m sure I will download the guides for other parks we visit.

We stayed in Study Butte which we found to be an ideal launch point for both the park and some evening visits to Terlingua.  Our four-day itinerary at Big Bend consisted of the following.

On our way west out of Big Bend, we decided to go through Marfa.  If you haven’t heard about Marfa, it’s a funky little town in the middle of nowhere that is a legitimate destination for foodies and art lovers.  Admittedly, we didn’t spend much time in Marfa and it feels a little like a place that is trying to hold on to its authenticity.  There are lots of people wandering the streets that are apparently looking to see and be seen.

I was born in Laguna Beach, CA and as a teenager used to spend a lot of time north and south of Main Beach.  What I remember is a town that was home to artists and beach junkies and all the people in between.  Then along came a little show called ‘Laguna Beach’, and every time I go back home, I get the same vibe as I had in Marfa.  It’s great for local businesses but also a little sad to see the takeover.

It seems everyone that has been to Marfa will ask you if you have seen the Marfa Ghost Lights.  Right off the highway is an entire rest area dedicated to viewing them.  Of course, we couldn’t visit this town without at least giving the lights their due.  It was a frigid night, quite windy, but that didn’t stop tons of people from coming out for their chance to see the mysterious orbs that dance just outside of town.  Of course, I had to google what causes them, which immediately takes away from the folklore.  Either way, I think on a warmer night with a group of friends, it could be a fun place to chill and tell spooky stories. 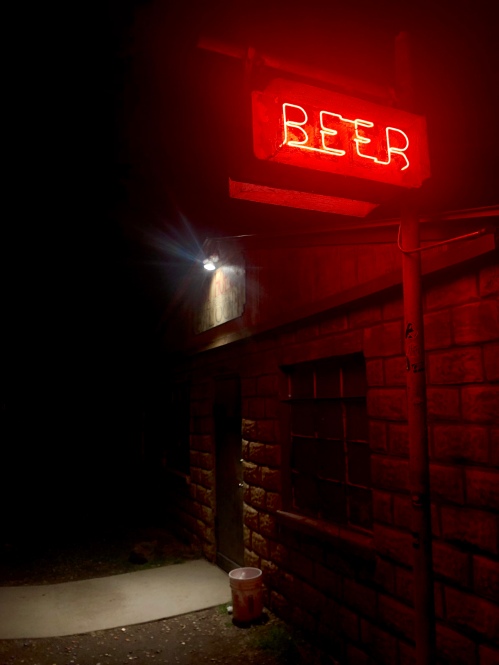 The first time I consciously recall hearing of Marfa was on an episode of Parts Unknown with Anthony Bourdain.  Lenny and I are huge fans of the show and always enjoyed Bourdain’s desire to go to any place the locals would hang out.  The Far West Texas episode was one of Bourdain’s last before his death so as our own little pilgrimage, we decided to pop into one of the local bars where Bourdain had a drink and visited with the owner.  It’s a typical small town bar, a couple of pool tables with torn felt, and not much distinction other than the large bright red neon sign reading ‘BEER’, and a parking lot paved entirely with beer bottle caps.

Type Marfa into Instagram and you will undoubtedly scroll through thousands of photos of the Marfa Prada art installation.  Strangely, it’s not really in Marfa but closer to Valentine.  It’s a little building right next to the two-lane highway complete with real Prada purses and shoes in the window.  Of course, you can’t shop there but people stop and take some pretty unique photos which are in themselves, their own forms of art.

A couple that we met in Terlingua suggested we drive a little further into the town of Valentine.  There is a small cafe off the road where a scene from the movie Giant starring James Dean, Elizabeth Taylor, and Rock Hudson was filmed. 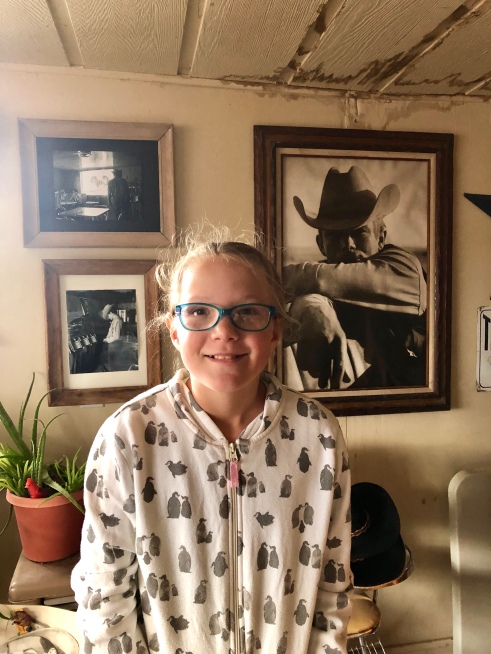 We were told we could stop in and have a bite there but when we arrived the owner was just leaving the building.  We quickly explained why we were traveling through and with amazing Texas hospitality she opened the doors to let us in and served us a nice hot cup of coffee.  Kami, who is a petite woman who looks like she got it a fist fight with the Texas wind and won, explained to us that she bought the cafe a while back after it had been closed with hopes of opening it back up.  What she didn’t account for was that she would have to get everything in the kitchen back up to code and for such an old building, that was going to be a massive undertaking, so she is now in the process of turning it into a little boutique.  Kami still has lots of old memorabilia in the shop and told us that the town is slowly being deserted and she picks up items around town in abandoned buildings.  Kami’s personality is as big as Texas and if anyone can make a go of a shop in the middle of nowhere, it is her.  We wished her luck and headed back to the Airstream for dinner.

On the drive back home, as the sun was going down, you could hear faint music blowing in the wind.  We pulled over and on the side of the road is a scene from the movie Giant with James Dean looming large over the mountains in the distance.

These were our last few stops in Texas on our way west.  We had hoped to continue on the Guadalupe National Park, Carlsbad Caverns, and then White Sands but heard they were all closed.  There was winter weather chasing our tails, so we continued on.  We will have to make the trip back through to complete that area of Texas some other time.

Next stop, sunny (or rainy) California!